On October 4, 2022, Minister Hugo de Jonge, Minister for Housing and Spatial Planning, also on behalf of the Minister of Nature and Nitrogen and the State Secretary for Infrastructure and Water Management, answered the questions about Plantation Bolivia from the Partij voor de Dieren (PvdD) of 19 May 2022. More than five months it took 25 questions to answer, which creates the expectation of accurate and careful answers.

When reading, most of the answers appear to provide a general story and little news (‘…I am confident that the procedures are followed in accordance with the law and regulations…, blah blah blah… *).

Two answers stand out because they are entirely inaccurate (the answer to question 1 and question 8). 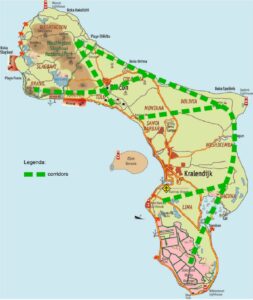 Plantation Bolivia, this large 33 square kilometer area which forms THE ONLY ‘undeveloped’ ecological connection (nature corridor) between the northern and southern halves of the island. The wildlands of Bolivia serve the crucial ecological role of natural corridor for much of the native fauna and flora. (Source: Brief Biological Inventory of Bolivia, Bonaire, Netherlands Antilles,carmabi feb1998)

The “wildlands” of Bolivia serve the crucial ecological role of natural corridor for much of the native fauna between the northern and southern halves of Bonaire.
(Source: Update Carmabi report March 1998)

Ecological corridors are an essential element in conserving the biodiversity and proper functioning of ecosystems. Without their connectivity, a very large number of species would not have access to all of the habitats needed for their life cycles (reproduction, growth, refuge, etc.) and would be doomed to disappear in the more or less near future.

Connectivity refers to the ability of plants or animals to move freely through a landscape, seascape, or freshwater environment. The main goal of connectivity is to facilitate movement of individuals, through both dispersal and migration, so that gene flow is maintained between local populations. By linking populations throughout the landscape, there is a lower chance for extinction and greater support for species richness. More connectivity means fewer barriers to dispersal or migration and less fragmentation.

“Ecological corridors are important for the survival of animal species on Bonaire: they are areas that are widely used by the various important species for movement between nature areas. The corridors therefore ensure that the habitats are much larger than if there were only isolated nature areas. Securing such corridors for the future (no spatial developments) is therefore essential.” (Source: SMB)

The second disturbing error, the answer to question 8, the minister states that the SMB considers that the natural values ​​of Bolivia are relatively limited. INCORRECT, the SMB has included Plantation Bolivia as an area containing IMPORTANT natural values such as caves with endangered bats and endemic invertebrates, Important Bird Area, nesting site for the Lora and Barn Owl, tropical dry forest.

“Spatial developments in ecologically valuable areas should be avoided as much as possible. For adequate protection, the establishment of corridor and buffer zones is desirable.” (Source: SMB)

The PvdD will continue to ask further questions to correct these issues.

You can read the questions and answers for yourself.

*these answers were given after the Follow The Money article was published (‘The Island Governor, appointed by the Hague, has the coast build up illegally‘ Oct1, 2022). This makes you wonder.

HELP US TO SAVE PLANTATION BOLIVIA FROM DESTRUCTION!